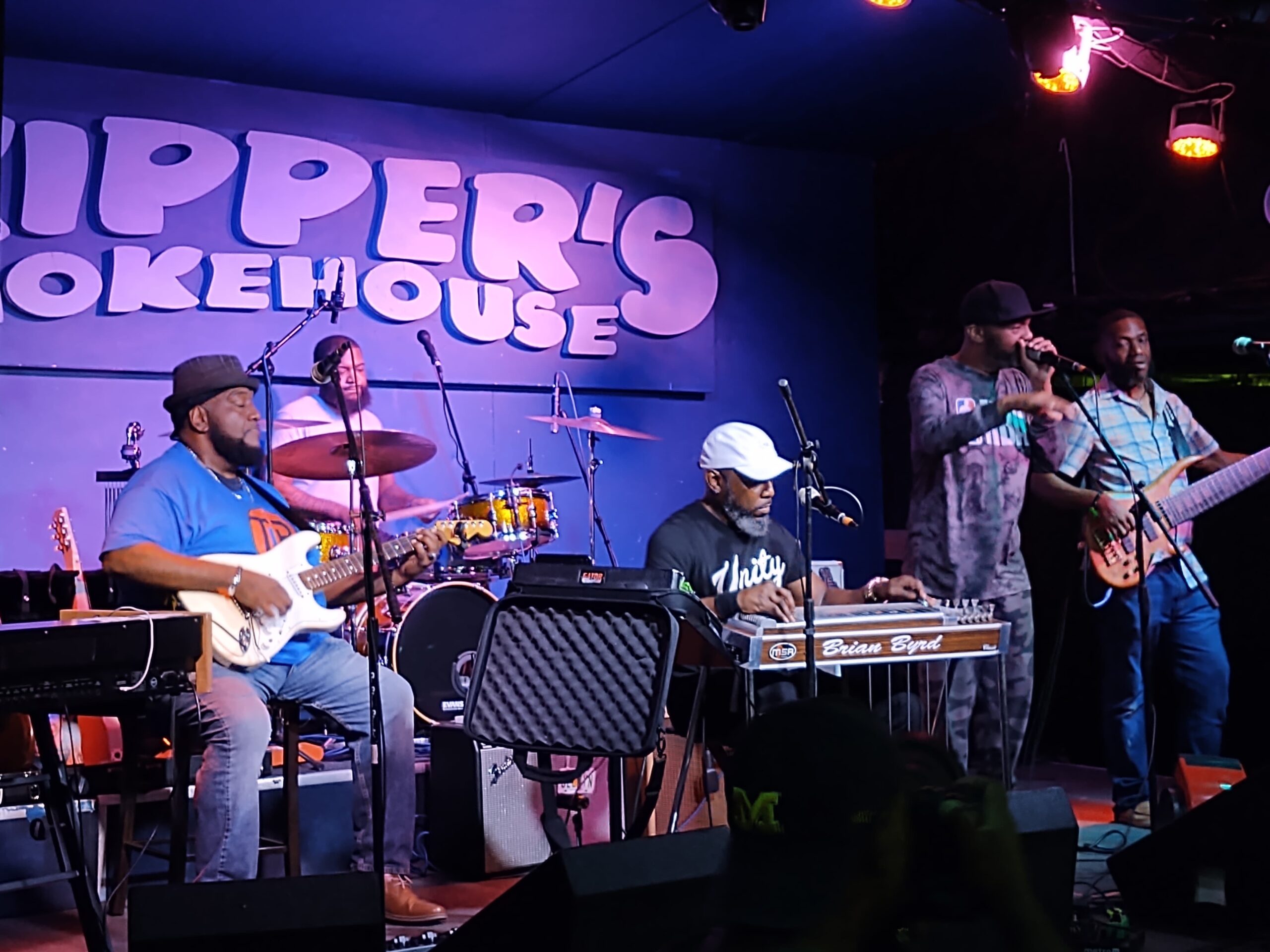 It had been a lot more than a hot minute since the beloved Lee Boys had graced the stage at Skipper’s Smokehouse in Tampa, site of numerous incendiary shows by one of the premier sacred steel bands in the nation. The South Florida crew had put together a tour all around Florida, the first four shows with Melody Trucks.

The Lee Boys were opening for blues slinger Selwyn Birchwood on a drizzly Friday night, June 24. We had a chance to catch up with them briefly before the show. Our first question was checking on brother Keith Lee, who is at home recovering nicely. It is hoped he will be ready to perform in the near future. Also working through recent surgery is Earl “Big E” Walker. He did not play drums Friday; the band has two drummers, and Logan Wilson had the groove down pat. Walker was still traveling with the band, handling the merch table this night with his inviting smile. Video evidence shows that “Big E” did play in Tallahassee the next night! They opened with the feel-good tune (OK, ALL their songs are feel-good tunes!) “Good Time,” ensuring that we all would, in fact, have a very good time! Derrick Lee was handling lead vocals, with occasional backup from Brian Bird, the pedal steel master, and Alvin “lil AL” Cordy on bass. Next they offered two covers we hadn’t heard them play before: “Use Me” and “A Lovely Day.” Bird picked up the pace as he launched into “Rock Me, Baby,” B.B. King style. He is a fine vocalist and has the best smile! At this point, drummer Logan Wilson kicked it into overdrive, just in time for the song “Feel the Music”! Perfect! Alvin Lee was playing guitar, providing great rhythm so that Bird could soar with his slide. He led the band into a wicked very uptempo jam that worked its way into “When the Saints Go Marching In,” with Derrick Lee doing his famous hand-clapping. Speaking of hand-clapping, there was great applause and praise from the crowd after each and every song! Next up was a favorite of the band, “Don’t Let the Devil Ride,” which turned delightful when Wilson grabbed his mic and sang… beautifully! Bird again dazzled on pedal steel. The Lee Boys then grabbed two of the favorites from their repertoire: “Shaky Ground” which melted into “Give Up the Funk (Tear the Roof Off the Sucker).” “In the Morning When I Rise” was a nice tempo change. Bird then roared off on another blues tangent, really killing it. This was also the point when the sound engineer from Danger Sound in Tampa and a buddy who came to talk with him had a protracted conversation. Lesson learned: don’t sit right behind him. The sound was a bit louder than it needed to be all night, and Derrick’s vocals were under the mix a bit. I don’t know if the engineer was too busy watching the hockey game or if he just wasn’t paying attention in general. To this point, Alvin Lee had not been singing (with Derrick, Bird, Cordy, and Wilson, the vocals were well covered), but he jumped in on the band’s great tune “Testify” (title track of their 2012 album), introducing everyone and encouraging solos from Cordy, Bird, and then Wilson (vocal AND drums).

Bird wore that grin again as he launched into the blistering Don Nix classic “Goin’ Down” — so wicked on the pedal steel. And that left it to Cordy to help close out the night singing “Turn On Your Lovelight,” such a perfect way to end The Lee Boys’ triumphant return to Skipper’s Smokehouse.

Looking forward to the next one with everybody healthy!

[TLB: Good Time, Use Me, A Lovely Day, Rock Me Baby, Feel the Music, Jam > When the Saints Go Marching In, Don’t Let the Devil Ride, Shaky Ground > Give Up the Funk (Tear the Roof Off the Sucker), In the Morning When I Rise, blues Brian, Testify, Goin’ Down, Turn On Your Lovelight]